Established in 2001, USLLS’s objective was to run Five Year Integrated Professional Law Course and to serve as an institution of advanced legal studies. It was the first University Law School established in the vicinity of the Supreme Court, Delhi High Court, various subordinate courts, commissions, tribunals and various monitoring offices of national and international voluntary organizations. Its Faculty is selected prescribing higher qualification than the University Grants Commission (UGC).

The approach of the law school is to develop a positive attitude in students and make them realize that the lawyers are an integral part of the system of adjudication, determination of policies and setting up of standards for regulation of various activities through relevant institutions.

University School of Law and Legal Studies, GGSIPU is organizing a National Webinar on the topic, ‘CYBER UTOPIANISM, DIGITAL MILITARISM AND CYBER GANGS: A NEW TERRAIN FOR SOCIAL AND LEGAL STUDIES’, on 10th July 2021, at 11:00 AM. The event will be graced by Padma Shri Awardee Hon’ble Professor Upendra Baxi, Professor Emeritus, University Of Warwick, United Kingdom, Formerly Vice Chancellor, University Of Delhi And University Of South Gujarat, as the Chief Guest and keynote speaker.

The event will be widely publicized and it will be open for all. We expect a substantial turnout from students, teachers and lawyers and the general public.

He began his law teaching career in the Department of Jurisprudence and International Law at Sydney Law School (1969-1973), and served as Professor of Law, University of Delhi (1973-1996.) He also served as the Vice-Chancellor of Delhi University (1990-1994), as well as the Vice-Chancellor, University of South Gujarat, Surat (1982-1985), the Honorary Director (Research) of the Indian Law Institute (1885-1988), and He is an honorary professor of the National Law School of India University (Bangalore); the National Academy of Legal Studies and Research (NALSAR, Hyderabad); . Professor Baxi has taught various courses in law and science, comparative constitutionalism, legal theory, and comparative social theory of human rights at the University of Sydney, Duke University, Washington College of Law, The American University; the Global Law Program at New York University Law School, and the University of Toronto.

Details of the Webinar

E-certificates will be provided to all the attendees.

The registration link is here.

All the participants are requested to join the WhatsApp Group through the Link provided at the end of the Registration Form (on submission). 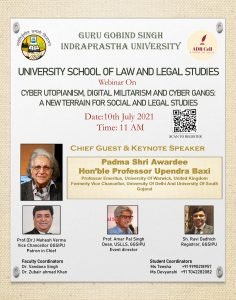