Noida International University is a UGC recognized World Class University. Spread over 75 acres of land, offering 150 courses and housing over 4000 students both domestically and from 25 international countries | NIU is Delhi NCR’s Largest Private and Best Upcoming Institute (awarded by ASSOCHAM 2016 and 2018).

About the School
School of Law and Legal Affairs of Noida International University has as its goal to enrich legal education by providing an environment in which law students can begin to learn the art of lawyering by serving real clients, and can develop the habit of reflecting on how to improve themselves, the profession, and the legal system.The School of Law and Legal Affairs has continued to change to meet needs of students, clients, community, and the Law School. In particular, we are proactive about constantly assessing and revising our educational methods.

Kulbhushan Jadhav was arrested on 3rd March, 2016 by Pakistani security forces in Balochistan province after he reportedly entered from Iran. On 8 May 2017, India filed an Application instituting proceedings against Pakistan in respect of a dispute concerning alleged violations of the Vienna Convention on Consular Relations of 24 April 1963 “in the matter of the detention and trial of an Indian national, Mr. Kulbhushan Sudhir Jadhav”, who had been sentenced to death by a military court in Pakistan in April 2017. In May 9, 2018, ICJ has stayed his death sentence after India had moved a petition before the UN body to seek justice for him, alleging violation of the Vienna Convention on Consular Relations by Pakistan. Public hearings on the merits of the case were held from 18 to 21 February 2019. In its Judgment of 17 July 2019, the Court first outlined the background of the dispute, before concluding that it had jurisdiction to entertain India’s claims based on alleged violations of the Vienna Convention. With a view to understand thoroughly the recent developments and the Indian contentions and the importance of the trial, SLLA is conducting an International Lecture on ‘My Experience in I.C.J. with special reference to the Kulbhushan Jadhav Case’ on 15th June, 2021, 02:30 P.M. IST

About the Chief Guest and Hon’ble Speaker

The Hon’ble Speaker for the International Lecture is Shri Harish Salve, QC, Senior Advocate, Supreme Court of India. Harish Salve QC is one of the world’s leading arbitration counsel. He is a very experienced and senior lawyer with a global reputation for international commercial arbitration and litigation. His practice also encompasses public international law, human rights, civil fraud, public, energy and tax. Harish is admitted to the Bar in England & Wales and was appointed a Queen’s Counsel in 2020. Harish was formerly Solicitor General of India and is a Senior Advocate at the Indian Bar (1992), practicing largely in the Supreme Court of India. In 2015, it was announced that Harish had been awarded one of India’s highest accolades, the Padma Bhushan.

Date- 15th June, 2021 (Tuesday)
Time- 02:30 P.M. IST
Registration is compulsory
The International Guest Lecture will be held on a Virtual Platform. However the number of attendees is limited and the links will be given to the registered participants only.
E-Certificates will be provided.
Submission of Feedback form after the Webinar is necessary to get the E-Certificates.

Registration Link is given below- https://forms.gle/H3TYW1GUojybfkkV9 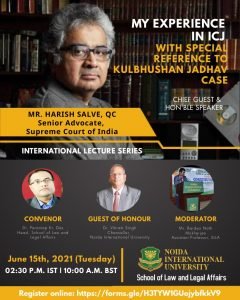